Explore These Natural Wonders in Your Backyard
Dave Parfitt 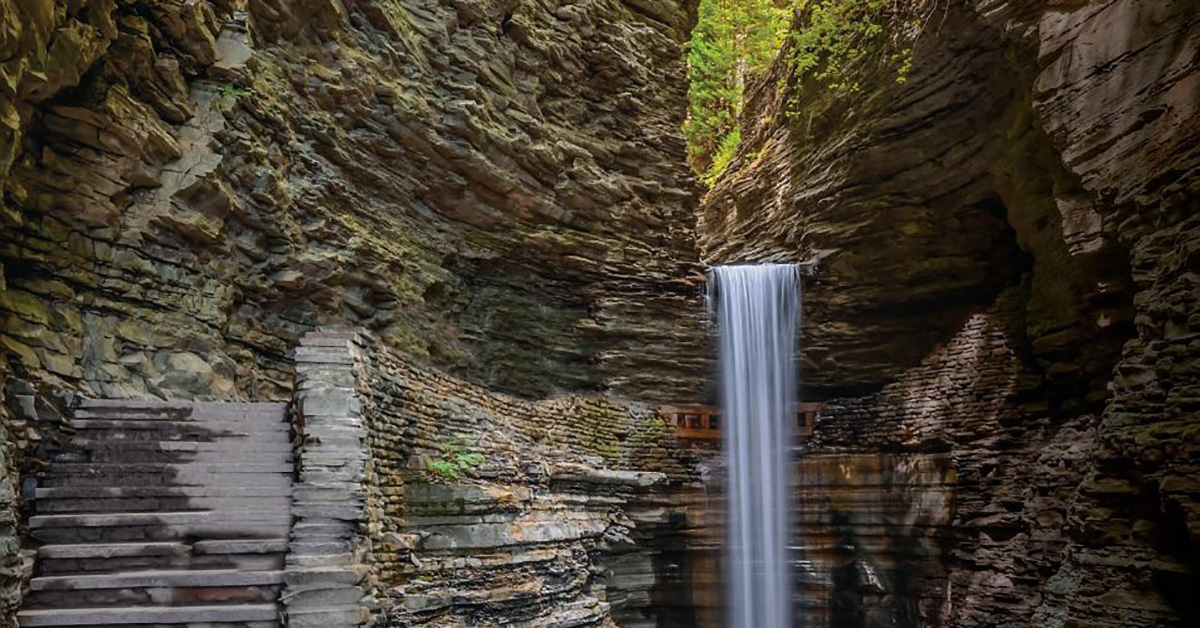 Mesmerizing and soothing, waterfalls are some of nature’s most stunning creations, and there are hundreds of them carved into the glacial landscape of Western and Central New York. Fall is the perfect time to visit these natural wonders, with the autumn glow highlighting the abundant cascades. Start with New York’s most famous waterfalls, in Niagara Falls and then leisurely wind your way throughout the countryside on this waterfall and natural wonder road trip.

If the national parks were America’s Best Idea, then Niagara Falls State Park was New York’s Best Idea. Established in 1885, it’s the oldest state park in the country, created by noted landscape architect Fredrick Law Olmsted (also designer of New York City’s Central Park). Niagara Falls State Park is filled with vistas that are ever-changing throughout the seasons. This park’s 400 acres allows visitors to experience the natural essence of the falls as well as some classic American attractions.

First, head to the free Observation Tower for a spectacular view of American and Bridal View Falls with Horseshoe Falls in the distance. Then, descend in the elevator to an attraction almost as famous as the falls themselves – the Maid of the Mist boat tour, in operation since 1846 and now using electric ferries. Brace yourself aboard the ship’s deck and enjoy a ride directly into the whitewater spray itself.

Next, take in Niagara’s power on a hike to the Cave of the Winds. Wooden walkways and staircases affixed to the walls of the Niagara Gorge lead to a “Hurricane Deck” buffeted by tropical storm-force winds and water. Is it fun? Fun doesn’t do it justice. Let the rush of the purifying water wash your stress away.

After encountering Niagara’s fury during the Maid of the Mist tour and Cave of the Winds walk, dry off, decompress and contemplate the park’s beauty and the foresight of preserving this swath of nature. Board one of the State Park trolleys that guide you deeper into the park, hopping on and off to explore Terrapin Point, Three Sisters Island, gardens, walking paths and the sublime serenity of the land.

From Niagara Falls State Park, head southeast to Letchworth State Park. Dubbed the “Grand Canyon of the East,” Western New York’s Letchworth State Park is a scenic area where the Genesee River heads north while dropping over multiple waterfalls. Over 400 million years, the Genesee carved a deep gorge with 600-foot walls made of layered shale mixed with limestone and sandstone. The Seneca people, stewards of the land for centuries, believed the beauty of the falls inspired the sun to stop at midday in admiration. The Depression-era Civilian Conservation Corps left its mark on Letchworth State Park from 1933 to 1942, constructing multiple camps, roads, bridges, shelters and cabins still in use today. One of the most scenic areas in the eastern United States, Letchworth State Park contains over 66 miles of hiking trails, whitewater rafting and kayaking and hot-air balloon rides.

The park follows the river about 17 miles from the southern Portageville entrance to the northern Mount Morris entrance, and Letchworth’s scenic Park Road takes at least 30 minutes to drive depending on stops. Letchworth’s three waterfalls (Lower, Middle and Upper) are clustered near the southern entrance to the park, and the historic Glen Iris Inn overlooks Middle Falls. In 1859, the Glen Iris became the home of William Pryor Letchworth until he donated it and his 1,000 acres of land to the State of New York to form a public park in 1906. The Glen Iris continues to operate as an inn and dining room seasonally from spring to the fall.

In 2016, the Humphrey Nature Center at Letchworth State Park opened in partnership with the State University of New York at Geneseo, which is located about 6 miles north of the Mount Morris entrance to the park. This modern nature center offers year-round programming, interactive displays and hiking trails. Visitors can find the Inspiration Point Overlook a short hike from the Humphrey Nature Center and enjoy spectacular fall views of the gorge.

After visiting Letchworth’s gorge, head east to Watkins Glen State Park near the southern tip of Seneca Lake. Watkins Glen is the gem of the New York State Park system. In this park, a waterway carves no less than 19 waterfalls over the course of two miles in a narrow gorge with 200-foot tall walls. The best way to view the park’s features is by hiking the stunning Gorge Trail, which winds past and above the waterfalls before culminating with a “backside of water” view of the 50-foot-tall Cavern Cascade.

This pristine area of Watkins Glen has a long history dating back to the Seneca people. In 1794, the Watkins family purchased 325,000 acres of land to establish a number of mills along the creek. Midway through the Civil War, the Glen opened as a natural tourist attraction, eventually achieving international prominence. Mark Twain described Watkins Glen as a “poem of nature” in his 1872 book “Roughing It.” Eventually New York State purchased the land, and Watkins Glen Park opened (free of charge) to visitors in 1907.

After hiking the Gorge Trail and North Rim loop, head into the town of Watkins Glen to cool off with some of the best homemade ice cream in the Finger Lakes area at Colonial Inn and Creamery. Those looking for a place to rest after this natural wonders road trip should head to the Watkins Glen Harbor Hotel. The AAA 4-Diamond Hotel sits on the shore of Seneca Lake and offers spacious, comfortably elegant rooms overlooking the water.

Taking a water fall road trip this summer? Don't let car trouble slow you down! Make sure your AAA Membership level includes the tow mileage and other benefits you need!

AAA: A Great Place to Work

Fall in Love with Local Apple Orchards and Pumpkin Farms