Cool Off with Your Family at a Water Park
Dave Parfitt 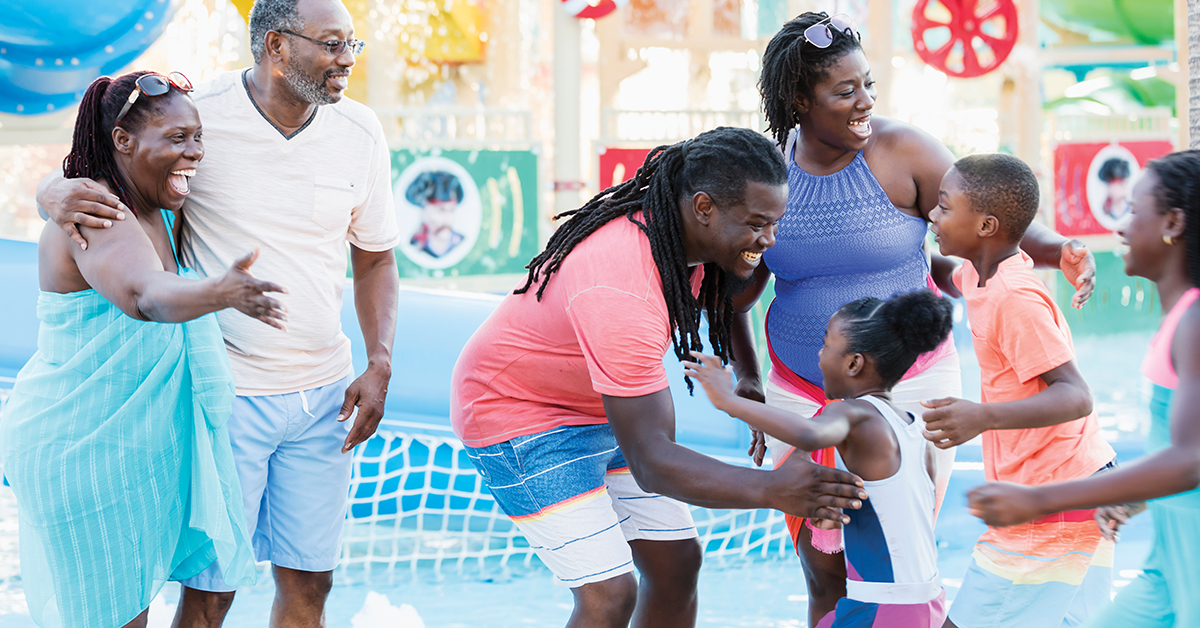 Ready for some wet and wild summer fun?

There's no better place to cool off with the family this summer than a water park! From water slides, to wave pools, to lazy rivers, and more, there's something for everyone.

Did you know that AAA Members save at top water parks all over the country? Learn more about some of the top parks you can visit!

SeaWorld’s Aquatica features the Dolphin Plunge, in which riders zoom through an underwater tube through the home of a pod of Commerson’s dolphins. Ihu’s Breakaway Falls is Orlando’s tallest, steepest, multi-drop tower slide, and Riptide Race became the first dueling racing raft ride in Florida when it opened in 2020. This tropical paradise also has adjacent wave pools with varying surf heights (the only ones in the United States), and a Sunny Day Guarantee in case rides are closed due to a change in the weather. Aquatica Orlando features 47 slides, rivers, and lagoons and 84,000 square feet of white sand beaches.

Save up to 50% with AAA Tickets

The most magical place on earth offers two options for cooling off at water parks (with separate admission for each). At the center of Blizzard Beach is Mt. Gushmore, with slalom courses, toboggan runs, and the 120-foot-high Summit Plummet, which plunges riders from the top of a “ski jump” tower at 55 mph. The other park, Typhoon Lagoon, recently debuted the white-water rafting ride Miss Adventure Falls, and Crush ‘n’ Gusher is the first water coaster thrill ride in the Orlando area.

Play your Disney vacation with AAA and save!

In 2017, Universal Orlando opened Volcano Bay, billed as the resort’s third theme park. At its heart is Krakatau Aqua Coaster, which whisks families through a 200-foot-tall volcano that gushes water by day and fiery “lava” on the nights the park is open. Tapu Tapu wearables, one of the park’s coolest innovations, allow visitors to explore the island while waiting in line virtually.

Save up to $65 at Universal Orlando!

Visit AAA Tickets for savings on top water parks, theme parks, and attractions like these:

An easy drive from Western and Central New York, a cluster of water parks has surged in the Pocono Mountains. The first in the area was a member of the Great Wolf Lodge chain. Kalahari Resort, meanwhile, is America’s largest indoor water park. In addition, Camelback Resort has its Aquatopia indoor water park as well as Camelbeach Mountain Waterpark for outdoor summertime fun.

The Lone Star State is dominated by Schlitterbahn, with locations in Galveston Island and New Braunfels. It was named the “Best Waterpark in the World” for 22 consecutive years by the theme park industry’s Golden Ticket Award. In addition, Schlitterbahn’s The Falls in New Braunfels and Infinity Racers in Galveston have been honored as a Top 5 Best Waterpark ride and a Top 5 Best New Waterpark ride, respectively.

The small town of Wisconsin Dells launched the indoor water park concept in 1989 with the Polynesian Water Park Resort. Over 30 years later, the area is flooded with places for watery pursuits, including the outdoor Noah’s Ark and the indoor-outdoor Wilderness Resort.

Raging Waters is a 60-acre water park in the Los Angeles area that boasts Southern California’s only water coaster: the 1,000-foot Aqua Rocket and its three lightning-fast drops.

Northern California’s Great America will open a redesigned and expanded South Bay Shores water park in 2020, increasing from 10 to 15 acres and increasing the attractions from 10 to 18. New attractions include Shark Reef Plunge six-story drop slides, Feeding Frenzy and The Barracuda five-story tube slides and a Tide Pool family lagoon.

Adventure Island’s 30 acres of water-drenched fun in the sun are located across the street from Busch Gardens Tampa Bay. In 2020, the park adds Solar Vortex, America’s first dual-tailspin water slide, which combines the high-banking rotations of a bowl with the rapid descent of a flume.

Six Flags Hurricane Harbor is home to Tsunami Surge, the world’s tallest water coaster at 86 feet high. The new coaster propels riders through 950 feet of slides and tunnels at 42 feet per second for the ultimate adrenaline rush.

The 360-degree looping Corkscrew Cavern and Cliffhanger’s six-story vertical-drop water slides are among the highlights of Roaring Springs, which is near Boise.

This 20-plus-acre Wet’n’Wild is no gamble when it comes to drenching fun. There are more than 25 rides, including the Hoover Half Pipe, which whooshes riders into a giant half pipe, and the Colorado Cooler, a super-long lazy river.

Carowinds water park Carolina Harbor was expanded and re-themed in 2016, and Boogie Board Racer is the first new slide since the redesign. Guests ascend 60 feet, grab a mat, choose a lane, and wait for the green light to start. Racers zoom through tubes, chutes, and even a 360-degree loop before a final drop brings them to a finish lane splashdown.

This state-of-the-art water park opened in the Outer Banks in 2017 with 30 different water slides, wave pools, and attractions such as the inflatable obstacle courses of the Deep Six Adventure Lagoon. Calico Jack’s Cove is a multi-level, pirate-themed play structure with water slides and interactive water effects.

Leader of the Pack

Great Wolf Lodge is the alpha predator of indoor water parks, with the largest collection of related resorts in North America. Stretching from Canada to California with nearly 20 woodsy-themed properties, Great Wolf Lodge can claim more tipping buckets, lazy rivers, and water slides than any other brand in the country.

Save at water parks this summer with AAA Tickets! Plus, get discounts at theme parks and attractions, sports events, concerts, and the movie theater!

When AAA and T-Mobile Team Up, You Save

Beat the Heat in Your Car