What Can You Do to Avoid a Collision?
Kip Doyle 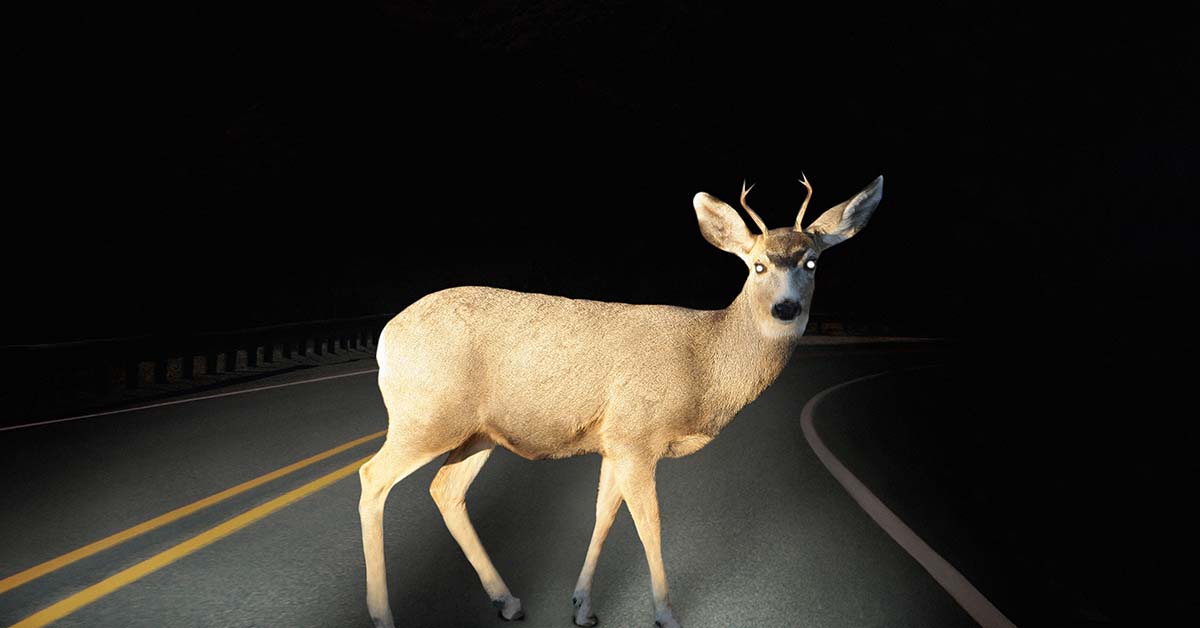 One sign that autumn has arrived is an increase in animal activity in New York State. Fall is breeding season for the state’s population of about 900,000 deer.

As deer roam looking for a mate, the likelihood of a car collision increases. According to the New York State Department of Transportation (DOT), an estimated 60,000 to 70,000 deer-vehicle collisions happen each year in the state.

And it’s not just deer and moose. Raccoons, squirrels, foxes, turtles and ducks occasionally share space with cars on the road. So do loose pets, such as cats and dogs, and livestock.

Animals on the road can be unpredictable. Follow AAA’s tips on how to avoid an animal-vehicle collision.

• Scan the road and shoulders ahead of you. Looking ahead helps provide more reaction time if you spot an animal. Also, remember some animals move in groups, so when there is one, there are usually more in the area.

• Use high-beam headlights if there’s no oncoming traffic. You may spot wildlife sooner if using high beams. This will give you time to slow down, move over or honk the horn to scare the animal away. High beams also help with spotting some animals when their eyes reflect light.

• If a collision is unavoidable, apply the brakes firmly and remain in your lane. Swerving to avoid an animal can often cause a more serious crash or result in a driver losing control of their vehicle.

• Be extra cautious at dawn and dusk. Most animals, especially deer, tend to be more active early in the morning and at dusk.

• Slow down and use extra caution when traveling through areas with a high and active wildlife population. Be aware of increased wildlife movement in some regions during certain times of the year, including hunting or mating season.

• Drivers should always wear a seat belt and remain awake, alert and sober.

If you end up hitting an animal in the road, don’t go near it. A wounded animal can be unpredictable and cause injury. If it’s in the middle of the road and blocking traffic, call the police immediately.

Animal Collisions and Your Insurance

While you may not always be able to avoid colliding with an animal, having the right auto insurance will help if your car ends up damaged. Animal damage falls under comprehensive coverage, which also covers things such as fire, hail and theft.

AAA’s local insurance agents know the challenges of sharing the road with wildlife this time of year. Get a quote today at AAA.com/Insurance.

I live in heavily deer infested Central New York in farm country. Whenever you see a deer you can almost always expect to have a few more so never assume it’s just the one you see first. Rare is the time I just see one crossing a road. Also, be especially careful around cornfields since they’re looking for a nibble in there both before and after harvest time.

These are common-sense tips -for the most part. But what about tips for the safety of animals? I see way too many dead animals on the roads. Why aren’t there rules for the protection of the animals?

Land owners should be taxed…

Land owners should be taxed for every posted sign! To help pay for insurance . Reason for high population of deer! Average hunter has no place to hunt deer. No hunt ! No harvest ! That simple

As a part owner of 200 acres of posted land, I take exception to the idea of additional taxing of those with posted signs. We have a select group of trusted hunters adequate for the size of our parcel and the deer population in our area. We found the signs necessary to keep out irresponsible, non-resident riff raff, of whom sadly, there are a lot of during hunting season.

I am both a land owner and a hunter. If you hunt responsibly and see a posted sign, you know it is your responsibility to talk with any land owners about hunting on their property. If you are hunting next to their posted property, before starting to hunt asking if you shoot a deer on your property or property next door that you have permission to hunt, and it travels over to the next posted property if you have permission or not to harvest that deer. Posted signs do not mean no hunting. It means the landowner is responsible for not only the land, but anyone on the land including possibly you, you should want to know who else might be on that land should you get accidentally shot, or so that you do not accidentally shoot others. If land were free roam, you have no idea who else is on the land and are taking a huge risk for not only your life, but others. If you do not remember this or were not paying attention during your hunter training, you do not belong hunting.

As well as all the common-sense rules for avoiding a collision with a wild animal I think slowing down when you're driving the backroads is adviseable. I live along one of those backroads. Down the road from me, the speed limit changes from 45 to 55 mph. I feel that is way too high for a narrow road. Being ultra-cautious and giving yourself a few extra moments to get to your destination means you can take it slower and might avoid hitting an animal or another driver.

A resident of a rural part of NY, thus little traffic, I drive as close to the center of the road as I can from dusk to dawn, and beep my horn every few seconds. Being in the center gives the driver increased reaction time after seeing the dreaded deer (or skunk!), and beeping the horn frequently, gives the animals an extra “head’s up”. When on a multi lane road with little traffic, it’s even easier to stay centered, and like tennis, in the “ready position”.

I hit a deer about 5 years ago. It was about 6:30pm in October. I always watch for deer and I never wanted to hit one. Yes, I always slow down and use my horn but it happens. I was on a divided 4 lane driving in the middle of the two lane. The speed limit is 65 and always when I come to one hill at the bottom I slow down to 45 because the speed limit changes to 55 at the top. I was going up the hill at 40 or 45 and a deer came right in front of me. I told my wife hold on because I knew I was good to hit him. The damage was not as bad because of my slower speed. I called 911 and a Sherriff and a NYS Police officer both showed up. They informed that by going slower up the hill the damage was not as bad. they both told they could tell I was going slow up the hill, because of my slower speed the deer didn't come up on the hood or go thought the windshield. Slower speed does help. I feel that watching myself, have my wife watch from the passenger side and the use of the horn does help. In the fall and the spring I am on high alert but I always watch all year long for deer. The deer are not going a way and we have to keep watching for them. They also have a right the country side.

Mike, Thank you for sharing…

Thank you for sharing! Encountering deer and other wildlife on the road can be very unpredictable. We're glad that the damage was minimal. Drive safe!

Put an Insurance Expert in Your Corner